Learn how to make a beautiful origami mushroom! This origami mushroom is very easy to make, and it looks very good, especially if you fold it with paper with different colors or patterns on each side. You can make a nice flat 2D paper mushroom, or you can make a cool slightly 3D mushroom and make it stand.

There isn't a precise location for the first fold (it's roughly at one third), so you can make mushrooms that look different. You can also round them in different ways, to make very round mushrooms, or very sharp and angular mushrooms.

To make the origami mushroom, you need 1 square piece of paper with a different color on each side. In the video, I use 15x15 cm (6x6 inches) origami paper (kami).

Once you have made your mushroom, you can also draw a face on the foot, to make it look like Toad, Mario's friend in Super Mario! :) Or make a green, blue or red bonus origami Mario mushroom.

Update 8/11/17: this origami mushroom model is so simple that it turns out I'm not the only one to discover it. Viviane Berty made it in 2016, you can see her cute origami bear model hunting for mushrooms on her Flickr account: https://www.flickr.com/photos/vivianedespapiers/29074607033/ I don't have the magazine, but I was told that there is a similar origami mushroom designed by Kyo Araki in NOA Magazine 61 published in October 1980! (Thanks Michel Grand for telling me)

How to make an origami Mushroom

Here are the step-by-step instructions to fold a Mushroom (photo diagram and/or video). 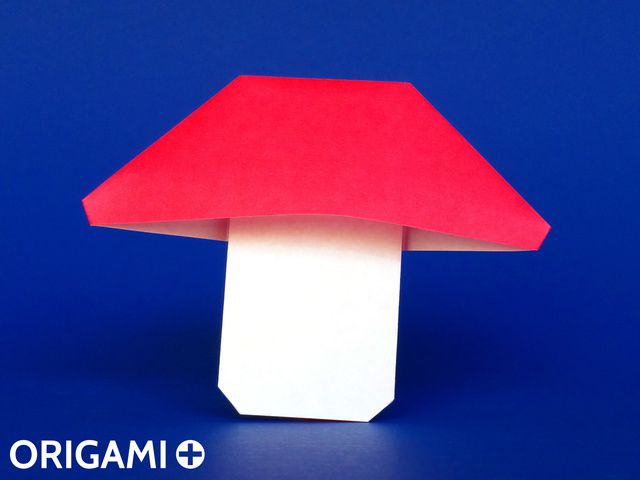 1. This origami Mushroom can stand or you can lay it flat.

In the next video, I will show you how to turn the mushroom into a tree.

If you fold this mushroom or any of my origami models, please send me some pictures so that I can show them in future videos !

I received many beautiful pictures of models from my new book Origami for Halloween. Thank you very much for sending them !

The book is now available in English, French, Spanish and German, and soon in Czech and Italian.

Please let me know if you would like to help to translate it to other langages. :-)

Thank you very much and happy folding!

If you fold this Mushroom, please send me pictures of your paper Mushroom so that I can show them here.

What do you think of this Mushroom?

Have you tried this this Mushroom origami model? How did it turn out? Please tell me, and send me a picture of your model so that I can add it on this page!

If you like this Mushroom and my other origami models, you can support me on Patreon. Thank you!